A performative and genealogical approach to the liminal subject’s social sustenance: the case of the disappeared detainees in Chile 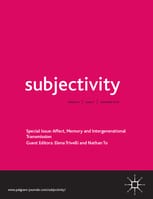 This paper focuses on subject’s figuration in the case of existences that are suspended and in question. Examining the disappeared detainee of the Pinochet dictatorship in Chile (1973–1990), it proposes and applies the strategy of the genealogy of socio-material devices to analyse how this subject has been performed since the crime’s aftermath through the acts of others who dispute versions of his/her identity over time. The term social sustenance names this process of subject persistence, based on the intended and unintended practices of other actors and things and the term liminal the subject sustained in society as an effect of successive, contingent and disputed acts. Through archival work and the analysis of textual, graphic and scenic artefacts, the paper traces the citational structure that in the play between biopolitical and resistance forces has sustained the disappeared detainee between 1973 and 1991 in Chile, granting this subject different statuses and capacities.

A performative and genealogical approach to the liminal subject’s social sustenance: the case of the disappeared detainees in Chile